Here are some quick thoughts from Day 1 of TechCrunch Disrupt in London.

Once again I’m stuck by the differences in the scale of investment here.  One founder told me, “we closed £400k pre-seed last year, and we’ll be announcing our £2.4m seed round on the stage later”.  These numbers seem common here – a bit different from what I usually here in Scotland.

Brexit was a hot topic for the panels on the main stage, and the consensus seems to be that there are two key issues for the UK.  The first is the availability of talent, and the second is the desirability of the UK for building teams for scaling.

In terms of the current status of tech in Europe, reports were launched by Atomico (on the State of European Tech) and Balderton (on the Talent Landscape), both of which look worth a more detailed read later.

AI and Machine Learning are very much in vogue at the moment, from established CyberSecurity player Darktrace down to social networks.  One company expects their AI to publish original scientific research within a few years! 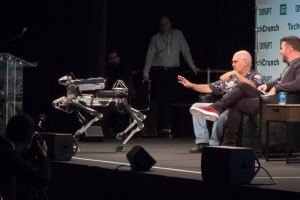 Boston Dynamics showed some cool videos of bipedal and quadrupedal robots.  I was quietly thinking that it was clever tech, when they brought their small quadruped on stage.  Suddenly I had a bit of a sci-fi moment – what was just cool on video was a bit mind blowing to see in person.  I now firmly believe that mobile robots are in our future in the next few years.

On a lighter note, I fear we may have reached peak app.  I met one founder building a dating app for air travellers – it makes a match then helps you book a seat next to your date to see if romance can blossom in the air.  A little later, I met a founder who is building an app to help you manage your profile and relationships across all your dating apps…  I half expected to meet someone pitching an app to manage the apps that manage your profile on the apps that monitor your dating apps for you…  Maybe next year.

Tomorrow is the big one for Cyan Forensics and 4 other Scottish Companies exhibiting on Startup Alley – wish us luck!  This is where we’ll be: 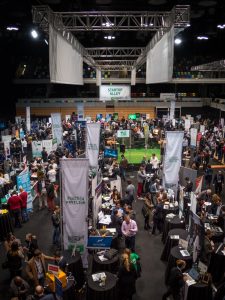