I was delighted to attend the launch of the 2015 Converge Challenge yesterday.    There was a tremendous buzz of excitement in the room from prospective entrants, and it is clear that the standard of this year’s competition will be very high.  The competition has widened its entry criteria to include all university staff, undergraduates, postgraduates, as well as recent graduates (qualified in the past 12 months). Even if a fledgling business has been started and it has been trading for less than six months with sales of less than £50,000, then Converge Challenge is open to applications.

I was also delighted to hear the announcement that the Scottish Funding Council and eight core University sponsors have agreed to support the program for another three years.

The Minister for Business, Energy and Tourism, Fergus Ewing, spoke eloquently on the need for a strong economy as the basis for a fairer society, and the key role that innovation increasingly plays in achieving that.  He cautioned us that although Scotland may have invented the modern world, there has been a falling off in our innovation and we need to have the humility to recognise this.  Programmes like CANDO, Converge Challenge, Innovation Centres, Entrepreneurial Scotland, Entrepreneurial Spark and Young Enterprise all have vital roles to play in restoring Scotland’s enterprises and innovation to their former glory. 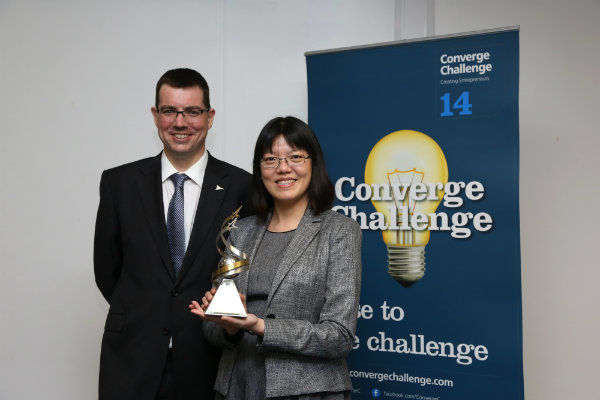 Claudia Chen, from 2014 Converge Winners Savitur Metrics, spoke about how the Converge process itself had been valuable and highly rewarding, saying it was mind opening, had helped her to connect to the entrepreneurial community, injected confidence and help her to articulate the thinking and business plan – as well as to develop her entrepreneurial skills.  She said the win had helped with a lot of publicity, and had increased confidence from investors, customers and the team.  The main prize, of cash and in-kind support, will be invaluable in launching the spinout in due course.

You may recall that I was part of the winning team last year, along with Claudia and Suresh Thennadil at the University of Strathclyde.  Until late last year I expected that by the launch of Converge this year we would be able to announce that we had spun out “Savitur Metrics” from the University, with me as CEO.  We had made huge progress in that direction, with a clear market need, strong support from potential customers, and a key investor ready to write a term sheet (with interest from other investors as well).  For a variety of reasons the spinout hasn’t happened, to my very great disappointment, so the event was slightly bittersweet for me.  I want to congratulate Suresh on his new role as Professor of Chemical Engineering at Charles Darwin University (in Darwin, Australia) and Claudia on her Chancellor’s Fellowship at Strathclyde – a prestigious 5 year appointment for focussed on research with a limited teaching commitment, and an open “tenured” contract thereafter.  Claudia is continuing to develop the ISS technology at the University in conjunction with commercial partners where trials were conducted during the Proof of Concept project, including Pfizer, Johnson Matthey and Fujifilm.

I look forward to seeing the Converge entrants and finalists this year – and for the next three years too now funding is secured!