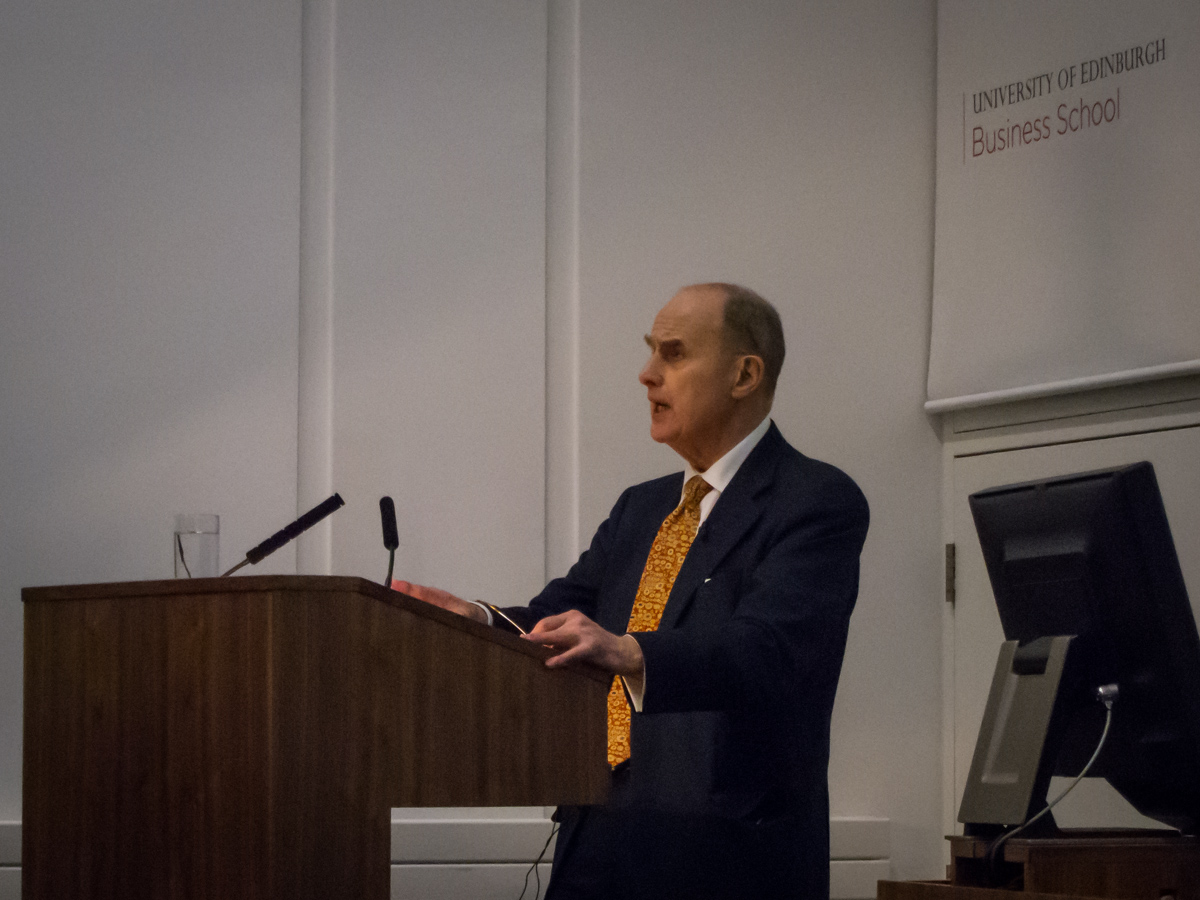 Barry Sealey, founder of Archangels, was the speaker at tonights iV Tuesday event.  His story is fascinating.

After national service in the RAF and a Cambridge education, he joined Christian Salvesson as a trainee.  He spent 9 months working on fishing boats learning the business, then got involved in the growth of the business into frozen foods and logistics.  He rose Managing Director, and the company eventally floated in 1985.  He took early retirement in 1990 aged 55, but he clearly didn’t take retirement very seriously…

He quickly became involved in the Caledonian Brewing Company, where he invested and helped to resolve management issues, helping it grow until it was sold to S&N.  His love for small businesses started here, and in invested in a couple of other businesses.  A restaurant investment went badly, but the others did OK.  Sandy Finlayson was involved on one of the deals and introduced him to Mike Rutterford (who had made money brokering insurance and mortgages, and later in estate agency).

Barry Sealey and Mike Rutterford’s first investment together was Optos, and they quickly invested in other companies.  The basic principles of investment that they adopted back then are still at the heart of Archangels now:

As they started to build Archangels, businesses came to them through references from their network – lawyers, accountants and others.  As Barry modestly puts it “It just grew rather”.

Now Archangels has raised a total of over £174m for companies, of which £74m came from Archangels investors.  The money has gone to 80 companies, of which 12 have been sold in trade sales, 3 floated, and 26 are still active investments.  The remaining 39 have failed, but represent less than 10% of the ammount invested.

The government have been supportive of Angel investment for some time, through tax reliefs such as EIS (the Enterprise Investment Scheme) and through Scottish Enterprise and the Scottish Investment Bank.  The Scottish Co-Investment Fund has invested alongside Archangels on a number of deals, and helps to increase their firepower so more deals get done.  The other non-Archangels investments have come from VCs or other Angel groups.

Barry has invested in every single Archangels company, and his only comment on the returns he’s seen was “I’m not broke yet…”

Archangels funds a variety of companies, but they must hve substantial opportunity for growth be eligible for EIS relief.  This usually means they are IP based, high-tech businesses, rather than lifestyle or services businesses.  They have slightly specialised in Life Sciences, but it is mainly about backing projects and teams they believe in.

A typical first round investment would be £500k, but first rounds have ranged from £25k to £2m!  Total investment runs at around £10m a year, with 2 or 3 new businesses taken on each year (out of 90 or more business plans received).

Archangels prides itself in being able to offer “help with a capital H” as well as money.  This often takes the form of people with commercialisation expertise.

Barry believes that Angels should back companies at the earliest (highest risk) stage but that VCs should come in later to fund growth.  However, the “VCs see an opportunity to screw the Angels” so in practice this doesn’t happen often.

It took 14 years from the first investment in Optos to its flotation, and Archangels still sees itself as a “patient investors” but they still need to see exits.  The trade markets are slow just now, with large corporations cash-rich but very cautious.

To finish on a positive not “There’s always money available for good ideas and the right people”, and “Scotland is one of the best places in the world to start a business right now”.

The Q&A threw up some interesting questions!

Q: What would you change about Archangels

Q: What is Archangels biggest asset

A: “People – the board of directors and the management team”

Q: What is your favourite Archagels investment

A: “Optos, it was the first and I was chairman from investment to floatation, and I am stilla shareholder.  Another favourite is Flextricity” (which utilises mostly unused backup generators to help cope with power shortages)