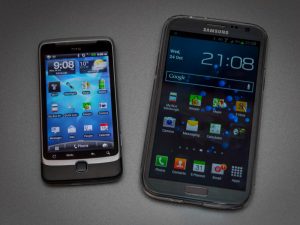 Various people have asked me how I’ve got on switching to 4G on my phone, so I thought I’d share my thoughts…

Overall verdict?  Even though my new 3G handset was much faster than the old one, I have found EE 4G service to be excellent.  Take it if you can get a good deal, only pay list price if you really need it!

I upgraded my phone to a Samsung Galaxy Note II in November last year, on T-Mobile.  My contract was for 1200 minutes, unlimited texts and 750Mb data, for £32/month with an 18 month contract and free handset.  Although the data limit is quite low, exceeding it only results in video/audio streaming being disabled but the web/e-mail keeps working, so data was effectively unlimited for anything I cared about.  I think that’s a pretty good deal.  I got the LTE version of the handset so I had the option to upgrade to 4G when the network launched.

At first neither the T-Mobile shop or helpline were able to tell me how to upgrade to 4G, and the website just kept telling me to call or go to a shop!  I tried several times over about three weeks, until finally someone was able to tell me the best deal I would get on 4G was taking a new 12 month,  £46/month contract.  That would give me 3Gb data, and unlimited calls and texts.  I wasn’t prepared to pay that much or extend my contract by six months, especially since the new phone seemed much faster on the 3G networks than the old one anyway.

Although this is really a review of 4G, I should add that I love the Note II.  The big screen makes web browsing and e-mail a much more pleasant experience, and being able to take notes on a meeting with the stylus on the screen has finall got rid of the “notes on scraps of paper” problem for me where many other technological solutions have failed (over the last ten years).  It is big, but I’m a big guy so it still fits in my pocket and I don’t mind.  It also means it has room for a big enough battery to keep it running for a full day of heavy usage, including tethering!

Having given up on 4G, I got a call from EE one day in December, offering me the option to upgrade to 4G.  This time they offered me 6Gb data, unlimited calls and texts and an 18 month contract for £32 – the same as I was currently paying!  Basically I got more of everything on a faster network for the same money.  That was a “no brainer” for me and I signed up.  They really left money on the table, as I had always thought I’d be prepared to pay a few pounds a month more for 4G…

Switching over to 4G was utterly painless.  They sent me a new SIM, which swapped in with just one text message to activate it.  The only other things I had to do were re-record my voicemail greeting and download the EE account management app (uninstalling the T-Mobile one).

After switching, I immediately went away to locations without 4G coverage but 3G coverage performance was every bit as good as I had with T-Mobile because it is the same network.  No loss, no gain.

There are only a few cities with 4G coverage, but Edinburgh is one of them so when I got back from the Christmas break I started looking out for the “4G” icon appearing.  When I’m in the city centre, I seem to get it most of the time, and everything seems pretty darned snappy most of the time.  Noticeably better than 3G, although to be honest it doesn’t really transform the usability of the handset.

I was in London at the weekend, and the difference there is much more noticeable.  My experience in London in the past has been that 3G could be rather sluggish, but my 4G connection was snappy throughout.  I can’t really complain there was no signal on the underground right?

I used tethering a fair bit while I was in London and it was absolutely brilliant – in fact at times it felt faster and more responsive from my laptop than the 8Gb broadband I have at home or the corporate networks I usually use.  Faster, more convenient and cheaper than messing with my old 3G dongle.

On EE the deal seems to be that if you hit your data limit, they shut you off unless you buy an add-on data bundle, so choosing the right bundle is pretty important.

In general my data usage is fairly low – 1Gb a month would probably do for my handset-based usage.  Tethering can easily chew up 200-500Mb in a day however, so having the 6Gb limit is handy.  It gives me the opportunity to tether a few times a month when I’m out of the office without worrying about my limit too much.

I find the android app “3G Watchdog” matches almost exactly the data usage recorded by EE, and is a very convenient way of making sure I’m not blowing my allowance, especially when tethering.

In theory EE 4G plans offer other benefits like EE Wednesdays (an imaginative rebrand of Orange Wednesdays), online TV, free apps, movie downloads etc.  In the past I’ve used Orange Wednesdays to get 2 for 1 cinema tickets and I probably will again, but the other services are wasted on me.  I’ve played with some of them and they seem to work – I just can’t really imagine using them!

For the same price as my 3G contract, and with a 6Gb data allowance that leaves space for a few days a month of tethering, I think this is an absolutely brilliant service.  I’d have happily paid a little more than the £32/month it’s costing me.

The list price plans start at £36/month for 500Mb data, with 5Gb data costing £51/month or 8Gb for £56/month, so at list price this is NOT a cheap service.  At list prices I would either be struggling with a small data bundle and so missing the benefits of 4G, or paying huge monthly fee.  I don’t think either would be worth it to me.

It’s also worth noting the significant improvement in data performance on 3G I got from upgrading to a new handset that supports the latest version of 3G and clearly has a better antenna than my old one.  I suspect many people will see a big performance improvement from a handset upgrade as I did, without having to pay for a 4G tariff.