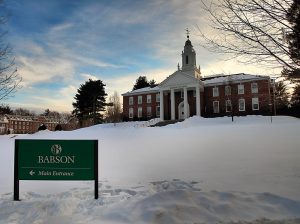 I was at a Saltire Foundation event the other night where Elaine Eisenman, Dean of Executive Education at Babson College was speaking.

She recounted a talk given by the President Leonard Schlesinger in which he exhorted would-be entrepreneurs to “Just start“:

Good advice for everyone involved in growing businesses I think.  For many people coming from a big-company or academic background, “take action” and “embrace uncertainty” are very much new territory, and I think that they can be linked intimately.  My objective is very often to try to help businesses identify the most important uncertaintaies they face, and to take action to find out things that reduce the uncertainty to embrace-able proportions.

Elaine also showed a slide suggesting that key ingredients for Entrepreneurs include:

A combination of creativty and rationality, a rather Google-like “do no evil” clause and a grounding in a strong sense of self seem like a pretty good starting point to me, and seem to be things that successful entrepreneurs I work with share.

I’m not sure that I really have a point to make, but I wanted to share these thoughts because they resonated with me at the time and continue to do so.