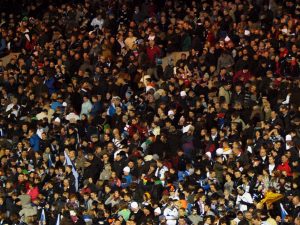 Of late, the term “CrowdFunding” has started to become commonplace in the vocabulary of entrepreneurs, but I think it is used to refer to such a wide range of activities it can be confusing.  As I see it, Crowd Funding  helps people collaborate to fund a specific project through a website, which usually takes a percentage of the funds raised in exchange for connecting projects with donors.  The exact mechanisms for funding and motivation of the donors can differ widely however.  Here is a whistle-stop tour of how I see the various different forms of CrowdFunding (note the names I’ve applied are simply my own labels – I don’t think they are in widespread use).  The examples are not intended to be exhaustive…

Crowd Charity is where a charity or not-for-profit (whether a national organisation or a community group) ask for donations to fund a particular project or goal through donations from many individuals.  The intent of donors is clearly philanthropic, and usually the donation structure will be tax efficient.

Crowd Donation is where an entity that is not a charity or not-for-profit asks for money, for example to start a business or fund an artistic project.  Here the donation is made with the intent of helping another party (i.e. for the “feel good factor”, but with the expectation that other party will ultimately profit more from it.

Crowd Advance Purchase is where people pay in advance for a product purchase, to enable the producer to purchase the materials, tools and services needed to create the product.  The motivation of the donor (customer) may be partly philanthropic, but is mainly to own a product that is not available through any other means.

Crowd Reward sits between Crowd Donation and Advance Purchase, where the donor will received some goods, services or other benefit as a result of donating but that is not their core intent.  For example, a band raising money to record an album may offer donors a signed photo.  The intent is much as for Crowd Donation, but with some benefit for the donor beyond “feel good factor”.

Crowd Equity is a form of investment in businesses whereby cash is provided in exchange for shares, using a platform with direct reach to individual small investors rather than a mainstream  equities market (such as a stock exchange).  The donor is (investor), who buys shares in the ownership of the business with the expectation (or hope) of making a profit on selling them in the future.  Of course, they may also partly be motivated to invest by the “feel good factor” involved in creating a new business.

There is often a perception that Crowd Funding is a form of Micro Finance whereby people can raise quantities of money too small for traditional lenders or investors to be interested.  In fact, there are examples of Crowd Funded projects that have raised hundreds of thousands so the size of the funding is clearly not always “Micro”.

In many countries, and especially the UK, equity investment in companies in Heavily regulated to protect individual investors who may not fully understand the risks.  This means that implementing Crowd Equity platforms is not straightforward, and has tended to push interest toward Crowd Donation, Reward and Advance Purchase.  In the UK, CrowdCube seem to have found a legal route through that particular problem, but it’s not yet clear whether it is a sustainable or replicable model in this environment.

Crowd Funding may also make seeking other forms of investment difficult in the future.  For example, Angels or VCs might find it hard to invest in a company that already had hundreds of individual shareholders.  This has led some to suggest that Crowd Funding is most appropriate for otherwise un-fundable projects.

An interesting example of a company ahead of the trend by UK standards is BrewDog (see brewdog.com).  They have raised £650,000 already from individual beer drinkers who like their product through a campaign called Equity for Punks, and are now raising a further round of £2 million (this in addition to other more conventional investment from corporate investors).  This is an equity investment in a public company and is as such a regulated activity with substantial cost overheads, but they are not listed on any mainstream stock exchange.