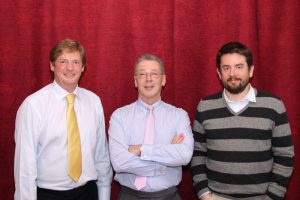 I am proud to be a Saltire Fellow, as is Salient Point Associate Fahd Baig.  Our Market Research Associate Ruth Stevenson has taught for the program, and helped a number of fellows with their projects.  With all these connections, we thought it was only appropriate that Salient Point should sponsor one of the Alumni events the foundation runs, to give something back.  I was delighted to be able to invite along two inspiring entrepreneurs that I have met courtesy of the Foundation, so they could share some of their thoughts with the alumni and friends.

I thought I’d try to capture some of the highlights of the evening in blog form for those who couldn’t make it themselves!

Clive Palmer from the Saltire Foundation hosted the evening, which was held at Edinburgh venue The Melting Pot.  I chose the venue because it is itself a social enterprise, incubating a number of small businesses and social enterprises in offices and collaborative space in the city centre.  If you’re ever looking for a meeting room or workshop/lecture space (for up to 100 people), you should take a look at what they have to offer.  I’d rather see Salient Point funds going to a good cause than paying room hire on a purely commercial basis, and the venue is a very attractive attic – light and airy, with much more character than typical rented rooms in hotels and the like.

Joe has a background in web development and photography, and blip is one of many “sunday afternoon” projects that he built in just a couple of hours.  The idea was to enable him to post a photo and a little text each day – a daily photo blog.  Some of his friends saw it and wanted to start using it, then some of their friends wanted in on the act too, so from origins as a personal journal the site grew to support other users.  Today blipfoto.com has nearly a quarter of a million unique visitors each month (making it one of the biggest websites in Scotland and a serious social media player).  People in over 170 countries have posted around 1.5 million images.  The site has won a number of awards including a BAFTA, and has turned into a full time job for Joe and a growing team.

Blipfoto has a real sense of community about it (an average of 6 comments is exchanged over each photo), including a large contingent of people who don’t use other social networking or photography sites.  Many people have got to know each other in the “real world” through the site, including one “blipper” who has moved half way around the world to be with someone they met through the site, and another blipping couple who are now married!

One thing that makes Blipfoto really different is that the users are the customers.  Like Facebook or Twitter, the basic functionality of the site is free to all users.  However, Facebook and Twitter have business models that allow advertisers access to user data and targeted to advertise to users.  On Blipfoto, there are no advertisers or data miners, and the site has no ulterior motive.   The commercial relationship is between users who want additional features or physical products and Blipfoto alone.

Blipfoto is a business, but the interests of the community of users and the business are exactly aligned – the better the community is, the more the business can thrive.  Joe describes it as “something with a purpose that appeals to ordinary people and is capable of making special things happen”, which I think sums up an attitude that goes beyond the purely commercial.

(on a personal note, I have blipped every day for nearly four years under the name cyclops, and it has become a very important part of my life)

Mike has had a varied career in the private sector (including running Debenhams Edinburgh store, and as a Venture Capitalist) and in the third sector (including time with Oxfam and RNIB, as well as creating the charity Teacher Support Scotland).  Since he joined Forth Sector as CEO he has had his work cut out reducing dependancy on (rapidly vanishing) grant funding and helping to ensure that in addition to being “well meaning” the charity was also capable of delivering on it’s promises.

Forth Sector provides placements in social companies to help disadvataged people, especially those with mental health problems, get back into the workplace.  Historically the charity depended on grants for survival – in fact over 60% of its income was in this form, but Mike recognised that there was no future in this model.  Moving ahead of the markets Mike reduced the organisations dependency on grant income to less than 6%, streamlining the social firms to deliver more for less and refocussing on delivering supported employment under contract to public sector bodies.  Given the changes in public sector funding that have taken place since the financial crisis, this move has proved to be key for the survival of the charity.  Forth Sector is now in the process of raising a substantial quantity of social investment capital to scale up the businesses further, increase the number of people the charity can support, and create a sustainable future.

Mike quotes an inscription from Karl Marx tomb “Philosophers analyse the world when what is needed is change” and he has certainly lived up to this with the change he has brought to Forth Sector, but he also comments that it is important as a CEO to “know what you shouldn’t be doing and let other people get on with it”.  My favourite observation however is his litmus test for the social firms – dubbed “Effing Bananas” from the phrase “I don’t care if we’re selling effing bananas as long as we are supporting our service users and building a sustainable future”.  A succinct way of reminding people that Forth Sector runs social firms for a purpose.

(on a personal note, I volunteer as a director and trustee for Forth Sector, and have the pleasure of working with Mike in this capacity)

The event was timed to correspond with Global Entrepreneurship Week, and I had already written a blog for the Saltire Foundation entitled My Three Wishes for Scottish Entrepreneurs, so I asked Joe and Mike what their first wish would be, to make life easier for entrepreneurs.

Thank you to Joe, Mike, the Saltire Foundation team, and everyone who attended the event for contributing to a great evening.