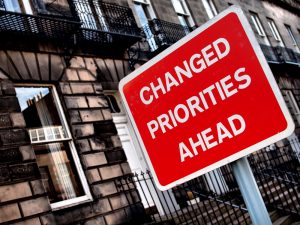 I spend a lot of my time hanging around technology companies and Universities, and sometimes I find these environments can be a bit of a bubble.  There are some views and opinions commonly held in these environments that differ from the outside world – a natural state for those who lead us technologically.

This can become a problem when the views are applied to creating products or services which are intended to be consumed in the outside world, where priorities may be a little different.

Here are some examples of tech-bubble-think which I have come across in the last few weeks and were likely to cause problems later on.

Even in the USA fewer than 25% of phones are smartphones, and and even smaller proportion (about 5%) are iPhones.  2% of mobile phones globally are iPhones.  Android is growing faster than iPhone in the population as a whole.

There’s a great Smartphone Infographic on Mashable which I find helpful in putting the spread of smartphones into context.

In the company of tech startups everyone has an iPhone (or at least an Android phone).  In the outside world smartphone users are the minority.

IE sucks at standards support and is unreliable and insecure, Firefox is the Open Source choice, Chrome is a fast and safe contender with great HTML5 support.

All of the  above statements are reasonable and I hear them often.  However 40% of web users are still using Internet Explorer (and not necessarily the latest version).   W3Counter has a great summary of browser usage statistics.

Geeks have abandoned IE, but in the outside world it is still the most common browser.

Apple has a bigger market cap than Microsoft these days, and Google dominates search.  However, 40% of web users are on Internet Explorer (see above) and more than 80% are running Windows.   There’s a lovely piece on TechCrunch about Microsoft’s numbers.

Those at the leading edge of tech have flocked to Apple, but the average consumer is still running Windows.

Very few sites make enough money to support themselves by throwing up a few banner ads.  If you want to know how much advertising is worth take a look at the page you’re reading now – has WordPress bothered to post any advertising?  I bet they haven’t – this blog doesn’t get enough visitors to make it worthwhile.  If I want, for less than $30 I can guarantee my blog will be ad-free for the year.  That suggests that WordPress think they would be pushed to make as much as $30 from my traffic in a year.

To get an idea of what is really involved in making money from online advertising, check this great post on Web Marketing Today.

There is a lot of hype about advertising on the web, but very few sites have succeeded in becoming profitable using only advertising revenue.

5) Everything is Moving to the Cloud

Online services are becoming more pervasive, but big companies still don’t trust the cloud with their data.  Heavily regulated business like banks and insurance companies will not be able to move their data out to the cloud until regulators adapt – which could be a LONG time.

Well publicised outages and data losses in Gmail and Google Calendar have dented confidence – including this recent loss of calendar data and a Gmail outage reported today.

Data access is not yet ubiquitous either – which limits willingness to migrate to the cloud.  There are large parts of Edinburgh where indoor mobile phone reception is terrible and there is effectively no data access.  When I travel, I often can’t get a data connection or find wifi either, especially in remoter or less glamorous locations.

Connectivity for the average consumer is nowhere near ubiquitous which, combined with privacy and reliability concerns, means that migration to the cloud will take time.

I try to keep in touch with technology at the leading edge, but I also try to maintain consumer perspective.  Here are some of the things I try to do to make sure I understand the world outside the bubble:

Do you have any top tips for seeing outside the bubble?